Key leaders from the Colorado Soccer Association, the Colorado Rapids, the Denver Sports Commission and VISIT DENVER teamed up with Colorado Lt. Governor Dianne Primavera and Denver Mayor Michael B. Hancock among others to make a case for Denver’s qualifications to host the world’s greatest sporting event. Others sent video greetings to express their support including Colorado natives and former FIFA Women’s World Cup champions, Lindsey Horan and Mallory Pugh, of the U.S. Women’s National Team.

«We have more than 100,000 youth and adult soccer participants across Colorado, and those soccer fans range from the Western Slope to the Front Range to the eastern plains,» said Lt. Governor Primavera. «Those soccer communities represent almost every county in Colorado, and they also represent nearly every ethnicity and language spoken in our state. We know how important this effort is to those communities, and we’re proud to work with them to bring World Cup matches here.»

During the site visit, Denver’s Bid Committee showcased Denver’s experience hosting world-class events like the recent MLB All-Star Game and the Concacaf Nations League Final this summer, among other national and international events.  The committee also showcased city highlights such as the technologically-advanced Empower Field at Mile High – ranked one of the top 10 stadiums in the country according to ESPN — and Denver’s robust soccer fan base.

«Denver is an incredibly vibrant city that is recognized across the country and around the world as a unique place that combines urban sophistication with outdoor adventure,» said Mayor Hancock. «We have the key infrastructure and other amenities already in place to host teams and welcome visitors from around the world.»

Denver has hosted more than 30 high profile international soccer events including national teams from around the world, and most recently, the first Concacaf Nations League Final, which brought more than 70,000 soccer fans to Empower Stadium at Mile High last summer as the world watched the U.S Men’s National Team defeat Mexico in the championship match.

The diversified nature of the World Cup tournament – 16 cities in North America will host matches – ensures that no one city is fully responsible for the costs of hosting this large-scale event. Additionally, because this is a one-sport, one-stadium event, Empower Field at Mile High would be the only competition venue, meaning Denver already has the infrastructure in place to host World Cup matches.

Cities hosting World Cup 2026 games can expect to see up to $360 million in economic impact, according to a Boston Consulting Group study. Beyond the short-term impact, Denver, the state and the Rocky Mountain region also would benefit from residual economic activity resulting from the global media exposure associated with the most widely viewed sporting event in the world.

During their visit to Denver, the FIFA delegation met with local stakeholders to discuss key topics such as venue management, infrastructure and sustainability as well as commercial, legal and legacy matters with a particular focus on the city’s essential infrastructure including Empower Field at Mile High, training facilities and potential FIFA Fan Festival™ venues.

The delegation will visit the remaining U.S. and Mexican bidding venues, as well as those in Canada, by the end of November and is expected to announce selected cities by the first or second quarter of next year.

The FIFA World Cup is the most prestigious soccer tournament in the world and the most widely viewed and followed sporting event globally. The FIFA World Cup 2026™ will be staged in multiple cities across North America and, for the first time, will include 48 teams – the largest World Cup tournament ever. Sixty of the 80 games – including the entire tournament once it reaches the quarterfinal stage – will be played in the U.S. Denver is the only U.S. city in the Mountain Time Zone that is under consideration to host as many as six games, all of which would be played at Empower Field at Mile High.

About Denver Sports
The Denver Sports Commission is an official affiliate of VISIT DENVER and serves as a resource for all sporting event organizers interested in Denver as a future location. The mission of the Denver Sports Commission is to proactively identify, pursue and attract new regional, national and international sports events and sports-related business opportunities that generate economic impact, engage the community and support Denver’s brand as an active, healthy city. More information can be found at VISITDENVER.com/DenverSports. 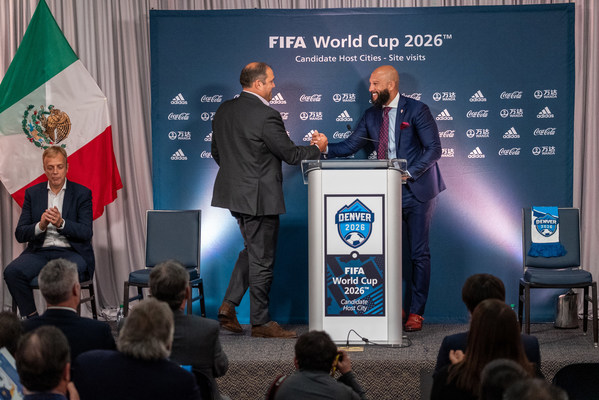 Bavan M. Holloway Named to Board of Directors of Callaway Golf Company

NFL Week 14 Filled With Home Favorites, But Road Teams Performing Particularly Well This Season Against The Spread, According to TheLines