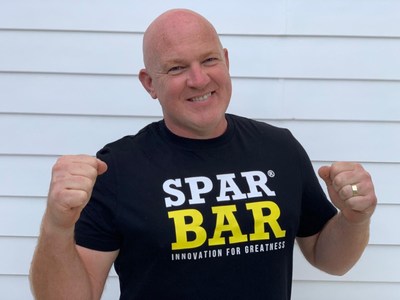 Few people have their finger on the pulse of international mixed martial arts like Richie Cranny, a full time mixed martial arts (MMA) coach since the mid nineties, creator of the global MMA training program Wimp 2 Warriors, President of the International Mixed Martial Arts Federation of Australian (part of IMMAF, the world governing body of MMA), Chairman on the MMA World Coaching Commision and MMA Editor for Men’s Fitness Magazine in Australia, where he put bantamweight champion Ronda Rousey on the front cover, the first woman ever to cover for the magazine.

SPARBAR is proud to announce Cranny as Athletic Advisor, and to become part of his journey of promoting MMA as a sport. «Cranny has been involved at all levels of Mixed Martial Arts for nearly three decades», says SPARBAR founder Jasvinder «Jazz» Gill and adds «He’s the right guy to be involved with the development process for any new SPARBAR equipment for MMA.»

The Wimp 2 Warrior program runs in 3 continents and involves around 30% to 40% women. «While the average age for the 20-week long fight camp is 35, we have people in their 50s and 60s, and are proud to prove that this sport is indeed for everyone,» says Cranny. «To make combat sports accessible to anyone is also the goal of SPARBAR and their innovative fitness equipment beyond a repetitive punchbag, so I am excited to be a part of the team now,» he adds.

Cranny is involved with the youth at the federation, and promotes talents who start to compete at the age of 12. «I got three kids, and they learn Jiu Jitsu, a sport where discipline is greatly valued,» he says and adds, «I believe all kids should learn martial arts or some sort of combat sports. In Martial Arts you have to lose constantly to develop. Therefore it takes away the fear of losing and seeing everything as a learning process. That is something to set you up in life.» SPARBAR is looking forward to extending their Kids & Youth Academy program and funding in Australia with Cranny.

The SPARBAR® products provide ideal groundwork for beginners and for professionals to develop their own training program and workout pace. They allow to adjust to your skills as you improve your own unique technique. Each SPARBAR device is a perfect all-in-one equipment for all ages. The products react to your power level and responds to your personal level of skills.

This is the secret of SPARBAR – the better you get, the more challenging your SPARBAR will be.

Raise the bar! More at https://sparbar.com/

A global sports fitness brand, SparBar is proud of its position as the inventors of the global combat sensation that known the world over as SPARBAR™. Founded in 2013 and backed by over 20 years of real boxing experience, we have single-handedly changed the fight game with our innovative concept of training without a sparring partner.

Used by world champions, international celebrities, world-leading gyms and with over 300M+ social media video views, SparBar’s success ensures that we are not just pioneers, but game-changers in the combat sports training equipment market. SparBar™ is the key to learning core fundamental boxing skills and developing hand-eye coordination as you build footwork, balance, speed, stamina, accuracy and power, simulating realistic sparring in a safe environment.