CAMDEN, N.J., Aug. 21, 2020 /PRNewswire/ — Subaru of America, Inc. and the Philadelphia Union today announced that Subaru Park, home of the Union, will provide stadium seating to the likenesses of local adoptable dogs at home games in the 2020 season, starting with the very first home game on Tuesday, August 25. These cardboard cutouts of dogs available for adoptions will temporarily fill in for real-life spectators at the Union’s home opener and very first game played at Subaru Park. 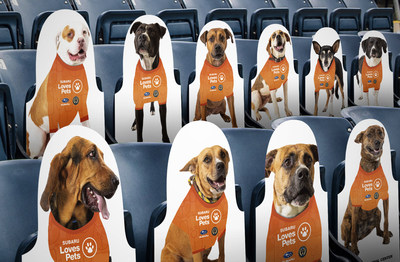 Inspired by the Union’s legendary Sons of Ben team supporter group, the «Dogs of Ben» cutouts will represent a real pup available for adoption in the greater Philadelphia area. Working with local shelters, including the Providence Animal Center, Subaru will fill the stands at midfield with the cardboard four-legged Union fans with the goal of uniting the real-life pups they depict with new owners.

«At Subaru, our love for pets runs as deeply as our love for soccer, and from the onset of our partnership with the Union, we knew we wanted to bring our furry friends out to Subaru Park and bring awareness to adopting shelter pets,» said Alan Bethke, Senior Vice President, Marketing, Subaru of America, Inc. «While home games may look a bit different this year, we hope the Dogs of Ben add some fun to gameday while helping to unite local dogs in the greater Philadelphia area with loving owners.»

«We are thrilled to be hosting the first Philadelphia Union game at Subaru Park on August 25 and to introduce the innovative ways we are incorporating our fans, community, partners, and even adoptable pets into a Union gameday,» said Tim McDermott, President, Philadelphia Union. «As a community-first minded company and alongside our partner Subaru, we will continue to look for ways to help and highlight organizations in need.»

Beginning with the first Philadelphia Union home game on August 25, viewers can spot the Dogs of Ben on partner station PHL17. Those looking to take home a real-life furry Union fan of their own can head to https://www.philadelphiaunion.com/subaru to learn more.

Subaru and the Union joined forces in February, kickstarting a multi-year stadium naming rights partnership that gave the name Subaru Park to the 18,500-seat sports and events destination and home of the Union. Together, the two companies are committed to supporting the greater Philadelphia community with charitable programs, including the Dogs of Ben program announced today, as an extension of the Subaru Love Promise vision.

Dogs of Ben is a part of the Subaru Loves Pets initiative, which is dedicated to helping improve the safety and well-being of animals in communities nationwide. The automaker’s commitment to pets is one part of its Love Promise company vision. For more information about Subaru Loves Pets, please visit www.subaru.com/pets.

About Subaru of America, Inc.

Subaru of America, Inc. (SOA) is a wholly owned subsidiary of Subaru Corporation of Japan. Headquartered at a zero-landfill office in Camden, N.J., the company markets and distributes Subaru vehicles, parts and accessories through a network of more than 630 retailers across the United States. All Subaru products are manufactured in zero-landfill production plants and Subaru of Indiana Automotive, Inc. is the only U.S. automobile production plant to be designated a backyard wildlife habitat by the National Wildlife Federation. SOA is guided by the Subaru Love Promise, which is the company’s vision to show love and respect to everyone, and to support its communities and customers nationwide. Over the past 20 years, SOA has donated more than $190 million to causes the Subaru family cares about, and its employees have logged more than 40,000 volunteer hours. As a company, Subaru believes it is important to do its part in making a positive impact in the world because it is the right thing to do.

The Philadelphia Union is an innovative, forward-thinking professional soccer club competing in Major League Soccer (MLS) and one of Philadelphia’s five major league sports teams. Driven by unprecedented fan support, MLS awarded the Philadelphia expansion franchise rights to Jay Sugarman in 2008 and the Union kicked off its inaugural season in 2010. The club has reached the finals of the Lamar Hunt U.S. Open Cup in 2014, 2015 and 2018, and has appeared in the MLS Cup Playoffs in 2011, 2016, 2018 and 2019.

The Union play at Subaru Park in Chester, PA on the banks of the Delaware River. The custom-built stadium is part of the Union’s unique waterfront campus, featuring a historic power plant rebuilt into a 400,000 sq. ft. creative office building, a state-of-the-art Training Complex, over seven acres of professional-grade practice pitches and multiple onsite parking fields. For more information about the Philadelphia Union, visit www.philadelphiaunion.com and follow @PhilaUnion on Twitter or Instagram.

About Sons of Ben

The Sons of Ben is a 501(c)(3) independent supporters’ club for the Philadelphia Union. In addition to supporting our Boys in Blue, members of the Sons of Ben are also dedicated to community building in Chester, our home away from home, and promoting soccer in the greater Delaware Valley. You can learn more about the Sons of Ben on their website, Twitter, Instagram, or Facebook.