OTTAWA, ON, Jan. 15, 2021 /CNW/ – Her Excellency the Right Honourable Julie Payette, Governor General and Commander-in-Chief of Canada, presided over the virtual Change of Command of the Canadian Armed Forces ceremony on January 14, 2020, which saw command transfer from General Jonathan Vance to Vice-Admiral Art McDonald. 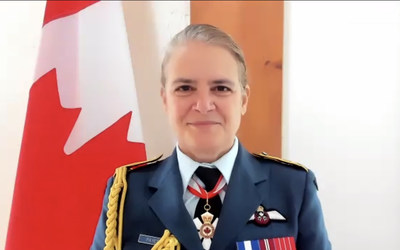 It is my honour and privilege to be a part of this time-honoured ceremony, the passing of the command in the Canadian Armed Forces. I am delighted to share this very special day with you, and with two remarkable men and their families.

First let me salute the members of the Canadian Forces who are watching today from locations across Canada and in the world. This year in particular, you have been asked to go far beyond the call of duty, to assist and support Canadians in the battle against the corona virus disease [or COVID]. You have put yourselves at risk every day in order to serve, all the while hampered by lockdowns and public health restrictions. Canadians have been heartened by your role in the fight. We trust you. For good reasons. Thank you.

The change of command is a key event in Canadian military life. Everyone in the Forces is aware of it, yet for most Canadians, there are no obvious outward signs. A leader here today is passing the torch to another – no break, no interruption. This remarkable service is simply continuing on to tomorrow, and to every day thereafter, as solid and dependable as the Canadian Shield. Some powers are meant to change hands quietly and peacefully, and you are all witnesses of this important event today.

As Commander-in-Chief, I have the pleasure of meeting members of the Canadian Forces and honouring their dedication to our country. I have seen firsthand how hard our servicemen and servicewomen work, both abroad and at home, to defend the principles of peace, freedom and democracy.

I am particularly proud of the work that was done in this regard by the longest serving Chief of the Defence Staff in the history of our country, General Jonathan Vance. He is the son of the late Lieutenant General Jack Vance, and a proud soldier of the Royals, the Royal Canadian Regiment whose battle honours date back to the war of 1812.

General Vance’s service as CDS was distinguished by his profound understanding of the global security risks and threats facing Canada and its allies. He had a clear view how to translate tactical needs into strategic goals, and he made sure that a versatile, flexible force was ready to respond to the government’s needs – in whichever situation, in whichever place.

With poise and humility, General Vance provided judicious advice, tackled tough issues – including needed changes within the military to move past beyond unacceptable attitudes – and led the Canadian Forces to face the new demands of today’s warfare environment, a world in which invisible enemies, whether domestic, foreign or planetary, whether human, biological or binary, must be taken seriously.

General Vance, like so many others, accomplished all of his duties while balancing military and family life. He was blessed with the support of his wife, Ms. Kerry Vance, and their children Olivia, Nora, Max, Julia and Mara.

Kerry: while you were taking care of a professional career, young adults and a soldier, you also shared your deep concerns and compassion for our military veterans and families at every assignment … at every occasion. Military life can be incredibly hard on people, but you are a living example of how it can be done efficiently, with grace and flair. Thank you, Madam.

Just so you know, General Vance has not yet shared with me where he will be moving next – I hope he does, as I hope we stay in touch – but I am absolutely convinced that any institution or body he will associate with will be immeasurably fortunate to count him in.

General Vance, a grateful nation wishes you the best wherever your next endeavours take you. All the best to you and to your family.

And so now, the torch is being passed onto the 20th Chief of the Defence Staff, Admiral Art McDonald.

Before I sing your praises, Sir, I would like to point out that you are not the first extraordinary son of Nova Scotia called Art McDonald. There is in fact another Bluenoser called Art McDonald, who won the 2015 Nobel Prize in Physics for solving the solar neutrino mass question. Perhaps Art McDonald is a common name where you come from, but there is nothing common in the world of achievements.

Admiral: as Chief of the Defence Staff, you will be called upon to lead one of the most agile armed forces in the world. You will also become the principal defender of Canadian values everywhere our troops are stationed, and you will be one of the most public voices advocating for peace and security. You will embody our deep commitment to the public good, from coast to coast, as well as in all corners of the world.

We have had the chance to meet on a few occasions already, especially since you assumed command of the Royal Canada Navy in June 2019. I also know many people who know you, and I would like to share some information that I have heard.

The perception in the Navy is that you are an ultimate leader and team player, Admiral. I am told that you can engage in official speak, efficiently and appropriately, while letting people under your command know precisely what is expected of them. Facts matter. You don’t hide them. I couldn’t agree more.

Speaking of facts, here are just a few more facts I have gathered.

I know, for a fact, that you have worked especially hard to improve the Navy’s recruitment process.

For example, you’ve helped open positions within the reserve – positions such as the «CyberWarriors» – to bring in young people who have special skills. Besides mere enrollment, it serves two important purposes: (1) it addresses today’s complex and ever-changing needs for expertise in cybersecurity; and, (2) it gives young people who possess these special skills a chance to become part-time sailors and reserve Naval officers, while remaining at the forefront of their professional trade in the civilian world. That’s a brilliant idea.

I also know for a fact that you have been a most supportive force behind several diversity initiatives. I think in particular of the RAVEN program in BC reaching out to aboriginal youths and of the remarkable recruiting successes at Toronto’s HMCS York Reserve, to name but a few.

And I extend my very best wishes and thanks to your wife, Sabine, for this demanding role she accepted by your side.

By virtue of your position, you probably know by now, Admiral McDonald, that the CDS also serves as aide-de-camp to the Governor General. And this does not solely mean wearing the Gold Aiguillette and meeting with the GG on a regular basis. It means serving our military. I look forward to working with you, visiting our troops here and abroad, witnessing them in action, and recognizing the excellence within our ranks and at all levels.

As the command passes on this special day, I cannot think of a better person than you, Admiral Art McDonald, to succeed to the functions of General Jonathan Vance, to lead our Forces forward and to accomplish Canada’s mission at home and around the world.

I put my trust in you and I know you will do an outstanding job.

And, if you allow me some RCAF parlance – Godspeed, Sir!