BUFFALO, N.Y., Oct. 7, 2021 /PRNewswire/ — Pepsi knows that for the diehard, loyal fans, football is more than JUST football watching: it’s an unapologetic, highly anticipated weekly ritual that takes preparation – from the gear and the snacks to the crew you celebrate every play with. This year, Pepsi is providing Bills fans everything they need to get ready for game day by bringing quarterback Josh Allen into their homes. 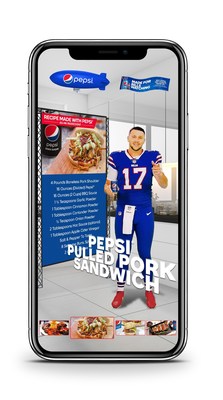 As part of its «Made for Bills Watching» campaign, Pepsi is unlocking a unique digital experience for fans that brings their favorite record-breaking quarterback into their homes to help take their pre-game food prep up a notch. The new AR recipe experience, exclusively on MadeforBillsWatching.com, gives fans a chance to cook alongside Allen, creating Pepsi Pulled Pork Sandwiches and other delicious recipes in the comfort of their home – or at least, that’s what it will feel like.

«With the season finally in full swing, I wanted to make sure Bills Mafia was set for game day with only the best,» says quarterback Josh Allen. «Thanks to Pepsi, even when I’m on the field making passes, I can also be at home with fans – virtually – making sure it’s a touchdown in the kitchen.»

On top of access to players via the new AR recipe experience and weekly Pepsi food and drink recipes, Pepsi has also teamed up with the Bills to help fans prepare for the ultimate game day with an instant win sweepstakes featuring exciting, one-of-a-kind prizes.

«As fans across the country return to their favorite game day watching and game day eating traditions this year, we’ve teamed up with the Bills to help fans unapologetically enjoy the experience all season long,» says Kathy Kennedy, Sr. Director of Marketing, PBNA North Division. «Pepsi wants to give fans the magic of gearing up for game day no matter where or with whom they find themselves watching this season.»

By scanning the QR code on specially marked Bills Pepsi, Diet Pepsi and Pepsi Zero Sugar products in 20oz. and 12oz. cans in 12pk/15pk/24pk/36pk, or Pepsi and Diet Pepsi in 15pk minis through Oct. 16, fans can win prizes ranging from signed Bills gear and team store gift cards to an authentic NFL helmet autographed by Josh Allen himself.

Fans who want to complete their game day meals by ordering in from their favorite local Pepsi pour restaurants on DoorDash during select Thursday night football games (10/14, 11/4 and 12/9) will receive a $3 value when they add a Pepsi to their DoorDash order ($15 minimum).

The fan-made portal is part of Pepsi’s larger «Made for Football Watching» campaign celebrating loyal football watchers and their personal game day rituals. For a chance to join the fun and for official sweepstakes rules, fans should head to Pepsi’s official Bills fan-portal MadeforBillsWatching.com.

PepsiCo products are enjoyed by consumers more than one billion times a day in more than 200 countries and territories around the world. PepsiCo generated more than $70 billion in net revenue in 2020, driven by a complementary food and beverage portfolio that includes Frito-Lay, Gatorade, Pepsi-Cola, Quaker, Tropicana and SodaStream. PepsiCo’s product portfolio includes a wide range of enjoyable foods and beverages, including 23 brands that generate more than $1 billion each in estimated annual retail sales.

Guiding PepsiCo is our vision to Be the Global Leader in Convenient Foods and Beverages by Winning with Purpose. «Winning with Purpose» reflects our ambition to win sustainably in the marketplace and embed purpose into all aspects of our business strategy and brands. For more information, visit www.pepsico.com.

BayCare to Train Next Generation of Pediatricians at St. Joseph’s Children’s Hospital in Tampa