Combining his passion for design and technology with CCM’s culture of innovation and craft, they will take the game to the next level

MONTREAL, July 31, 2020 /PRNewswire/ – CCM Hockey, a leading designer, manufacturer and marketer of hockey equipment and related apparel, is pleased to announce a partnership agreement with one of the most innovative and stylish players in the NHL, Auston Matthews. 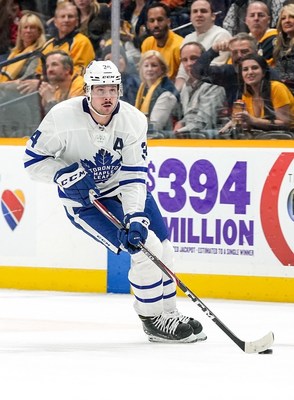 «We are stoked to enter into this collaborative partnership with one of the best, boldest and most unique players in the game and have him join the CCM family of the most elite NHL players in the world,» said Rick Blackshaw, CEO of CCM Hockey. «The timing couldn’t be better as the greatest sport on Earth finally resumes. Auston is about performance, commitment and style; and together we will be fearless game changers,» added Blackshaw.

«CCM has always been a company I’ve admired, and I am excited to partner with them,» said Matthews. «Their dedication to innovation and their forward-thinking approach with their products is something that really resonates with me. I am looking forward to what they will come up with next,» said Auston Matthews.

Dedication to innovation, performance and design

With dedication to innovation, performance and design, CCM’s innovation team includes over 50 engineers, industrial designers and biomechanic specialists who are highly driven to discover how to get the most performance out of its products. «Surrounding ourselves with creative, performance-driven and talented athletes such as Auston, with whom we can collaborate, makes our jobs easier and we are excited to have hockey players at all levels benefit from this partnership,» said Jeff Dalzell, Vice-president Product Creation CCM Hockey.

Since being selected first overall by the Toronto Maple Leafs on June 24, 2016, Auston Matthews has become one of the premiere players in the NHL. Matthews began his NHL career with a record-setting four goal performance in his NHL debut on October 12, 2016 and went on to become one of 16 NHLers to score at least 40 goals as a rookie, winning the 2017 Calder Trophy as the NHL’s Rookie of the Year. Matthews has represented the Maple Leafs at the NHL All-Star Game in four consecutive years and has scored the second most goals in the NHL since entering the League in 2016-17.

CCM Hockey is a leading designer, manufacturer and marketer of hockey equipment and related apparel. With its headquarters located in Montreal, the company has operations in Canada, the United States and Europe. CCM Hockey equips more professional hockey players than any other company, including superstars like Connor McDavid, Matt Dumba, Sidney Crosby and Seth Jones, as well as key female players such as Brianna Decker, Kendall Coyne-Schofield and Sarah Nurse. CCM Hockey is also the official outfitter of the American Hockey League, the Canadian Hockey League, and several NCAA and National teams. For more info, visit: ccmhockey.com.