JACKSON, Miss., Nov. 15, 2021 /PRNewswire/ — Mississippi State quarterback Will Rogers, who leads the SEC and is second nationally in passing yards, and Ole Miss quarterback Matt Corral, a semi-finalist for Walter Camp college football player of the year award, top a list of 10 nominees for the 2021 C Spire Conerly Trophy, which annually honors the top college football player in the Magnolia State. 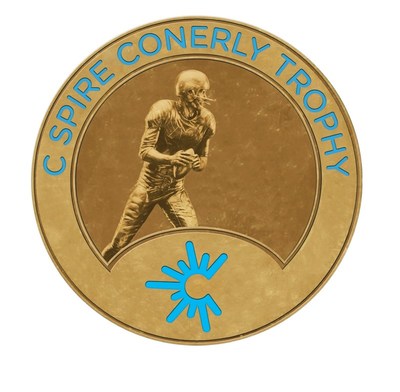 Rogers, who is coming off a record-setting six touchdown, 415-yard passing performance against Auburn, and Corral join nominees from eight other schools vying for the coveted award, which is named after College Football Hall of Famer Charlie Conerly, who also starred for Ole Miss and the New York Giants.

The 2021 C Spire Conerly Trophy nominees, in alphabetical order by school, include:

The C Spire Conerly Trophy presentation is scheduled for Tuesday, Nov. 30 at the Country Club of Jackson, 345 Saint Andrews Drive, in Jackson. A 5:30 p.m. reception will be followed by the 6:30 p.m. dinner program and trophy presentation.  Coaches and finalists from all the schools are expected to attend.  For ticket availability or more information, go to msfame.com or call 601.982.8264.  CBS football analyst Charles Davis will be the master of ceremonies for the awards program.

Now in its 26th year, the C Spire Conerly Trophy is named after the late Charlie Conerly – the only football inductee in the Mississippi Sports Hall of Fame who was an All-American at a Mississippi university, an NFL rookie of the year and NFL All-Pro member and quarterbacked a team to a world championship. C Spire has sponsored the outstanding player awards program for football in Mississippi since 1998. The trophy is awarded to the nominee selected as the top player by news media covering college football in the state.

About C Spire
C Spire is a diversified telecommunications and technology services company that provides world-class, customer-inspired wireless communications, 1 Gigabit consumer Internet access as well as a full suite of dedicated Internet, wireless, IP Voice, data and cloud services for businesses.  This news release and other announcements are available at www.cspire.com/news. For more information about C Spire, visit www.cspire.com or follow us on Facebook at www.facebook.com/cspire or Twitter at www.twitter.com/cspire.