CHICAGO, Oct. 31, 2021 /PRNewswire/ — Martha Rosenberg, who has served as editorial cartoonist with the Evanston RoundTable for over a decade, won a «Best Use of Humor» award from the Northern Illinois Newspaper Association (NINA) for a 2021 cartoon this week. 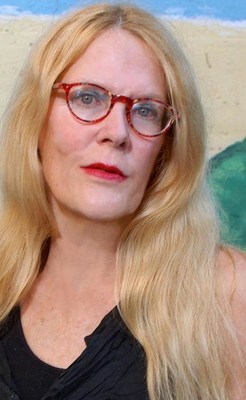 The winning cartoon depicts two, elementary school-aged children, locked down from COVID-19, asking their mother, «Mom, is it true people used to go out to stores instead of Amazon bringing stuff to them?»

«Martha Rosenberg’s cartoons and writing are incisive and brilliant. NewsBlaze is pleased to bring her insights to readers and readers love her work,» said Alan Gray, NewsBlaze Editor-in-Chief. «We look forward to seeing her new tragicomic cartoon book about life on the Chicago streets with HIV and crack. We’ll help with publicity after she selects an agent and publisher.»

NINA, founded in 1962 by Donald Grubb, longtime chairman of Northern Illinois University’s journalism department, includes as association members newspapers with a circulation of over 200,000 as well as independent weeklies.

Rosenberg is a former contributor to the National Lampoon, the parody magazine that launched the careers of P. J. O’Rourke and John (Ferris Bueller’s Day Off) Hughes. She has written and illustrated an award-winning health book, a medical textbook and hundreds of scientific and nonscientific papers. Rosenberg is currently working on a tragicomic cartoon book about life on the Chicago streets as HIV and crack debut.

Martha Rosenberg is the senior Health Reporter for NewsBlaze, and contributes to British Medical Journal (BMJ), Consumer Reports, Public Citizen, the Annenberg Center for Health Journalism at the University of Southern California at San Francisco and the Nieman Foundation for Journalism at Harvard University. She has appeared on CSPAN, National Public Radio and lectured at the medical school and university levels.

Trained in pharmacology, Rosenberg has successfully given voice to whistleblowers in both the drug and food industries who have sought to expose wrongdoing against workers, patients and the public.

To Connect with Martha Rosenberg, call or email NewsBlaze or connect with her on twitter @MarthRosenberg.

NewsBlaze was founded in 2004 as an independent online newspaper and information portal, forming relationships with other publishers and wire services. NewsBlaze covers broad topics of interest to readers worldwide, which has helped build a loyal, global following of readers, especially in Australia, North America and Europe.

Taoyuan Forest International Tourism Resort of China: An Open Invitation to All

Investor Alert: The M&A Firm is Announces an Investigation of the Merger of Golden Nugget Online Gaming, Inc. – GNOG