ROCK ISLAND, Ill., Oct. 25, 2021 /PRNewswire/ — Rock Island Auction Company, the No. 1 firearms auction company in the world, proudly presents Napoleon’s Garniture, a historical collection of militaria that will be showcased and auctioned off during the Premier Auction event, Friday, Dec. 3 through Sunday, Dec. 5. The Napoleon Garniture is among the most symbolic set of arms from the French Revolutionary Wars and Napoleonic Wars and dates back to when Napoleon was rising to power in the French Republic. 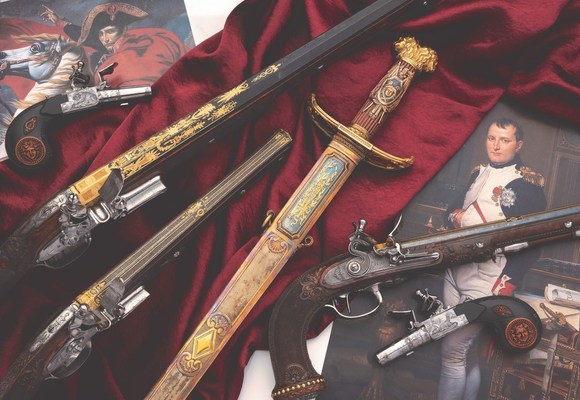 The Napoleon Garniture features five exquisitely engraved, and relief carved firearms and a gilt dress sword, which was presented to Napoleon by the Directory of the French Republic in 1797. The sword is the one Napoleon carried when he drove the Council of 500 out of St. Cloud, becoming the first Council and then later, Emperor of France.

«For more than two decades, Rock Island Auction Company has committed to procuring and auctioning some of the most historical firearms ever offered, and we are excited to showcase and auction Napoleon’s Garniture,» said Kevin Hogan, President of Rock Island Auction Company. «This collection of carriage pistols, a rifled carbine, pocket pistols, and a distinctive sword and scabbard is undoubtedly the most extraordinary garniture of some of the finest arms ever created by the Versailles Manufactory.»

This historical set of fine arms from the Versailles Manufactory, led by Nicolas-Noël Boutet, was first put on display in 1816 in London during an exhibition at the Oplotheca, which followed Napoleon’s defeat at Waterloo and his final abdication and exile. To date, Waterloo still remains one of the most historic and significant battles in European and world history, which brought an end to Napoleon’s reign in France.

About Rock Island Auction Company
Rock Island Auction Company is the world’s #1 auction company for firearms, bladed weapons and militaria. Founded in 1993 by its current CEO Patrick Hogan, RIAC continues to lead the industry with record sales numbers and their extensive and beautiful marketing efforts. Their 150,000 square foot campus consisting of two buildings, hosts around 18+ auctions each year. They actively seek consignments, be it a single weapon or a collection of hundreds, a thousand-dollar item or one million. For more information, please visit www.rockislandauction.com or call 1-800-238-8022.