An exhibition on the 10,000-year-old Shangshan culture opened at the National Museum of China in Beijing on Nov. 21.

A total of nearly 200 exhibits were displayed at the exhibition, titled Rice, Origin, Enlightenment: Special Exhibition of Shangshan Culture Archaeological Discoveries in Zhejiang, to demonstrate the value and significance of the rice farming society represented by the Shangshan culture to the Chinese civilization, as well as its contribution to and influence on East Asia and the world. 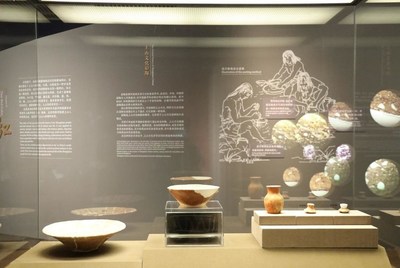 The exhibits included a carbonized rice grain that dates back to 10,000 years ago, shards of painted pottery works, millstones and bedstones, as well as exquisite pottery pots and cups unearthed. They mirrored the social, economic, and cultural development when rice farming just started, as well as how Chinese village settlements lived and conducted social production in the early days.

A seminar on the civilization of China and Zhejiang was also held at the National Museum of China as an important part of the exhibition. It was joined by renowned archaeologists from China and abroad. Discussions were held on the value of the Shangshan culture in both history and the present days, as well as the culture’s position in Chinese and human civilizations.