NEW YORK, Sept. 28, 2021 /PRNewswire/ — Chef Jack Mancuso, one of the most beloved Food Influencers on TikTok and better known to his over 3M social media followers as @chefcuso, has been named the official Grillmaster for the Buffalo Bills. In the past, Jack has worked with major sports leagues such as the MLB, MMA and even the NFL. However, growing up near Rochester NY, Jack has been a lifelong Bills fan and a dedicated member of the Bills Mafia. 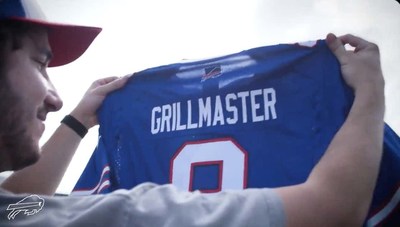 Jack has long shared his love for the Bills with his followers. «This is a dream come true for me.»

«I grew up near Rochester, New York, and I’ve been a Bills fan my entire life, so when the Bills called me and asked me to be their official Grillmaster, I said yes in a heartbeat,» Jack shared in his announcement video on his social channels. Jack has long shared his love for the Bills with his followers, often flaunting team apparel in his content. «This is a dream come true for me.»

Chef Cuso is no stranger to the world of sports partnerships. Last year, Mancuso was tapped for several videos promoting the NFL playoffs, such as Super WildCard Weekend, the NFL’s social media promotion #tiktoktailgate in anticipation for the 2020 Super Bowl, and CBS Sports’ HOMEgating Super Bowl promotion.

Jack is well known across TikTok and Instagram for his impressive grilling videos. He began his cooking career during college, when he started grilling for his house full of roommates. Since then, he’s only grown, reaching an audience of over 3 million people across TikTok, Instagram, YouTube, and Snapchat. Other recent partnerships have included Pepsi, SharkNinja, and DraftKings.

«Jack is one of the best creators on social media,» CelebExperts & The Digital Renegades CEO, Evan Morgenstein, noted about the partnership. «His passion for food, football, Upstate NY and the Bills really shine in his content! This is an amazing honor.» With Cuso at the grill, Bills fans can expect delicious grilling recipes, collaborations with the team, and most importantly to Bills Mafia: tailgating content from Jack throughout the season.

To inquire about booking Chef Cuso, email Christina at christina@celebexperts.com.