PARADISE ISLAND, Bahamas, Nov. 4, 2021 /PRNewswire/ — Atlantis Paradise Island, the lush oceanfront resort in The Bahamas, welcomes the global super star –  Doja Cat – for an exclusive outdoor concert event on New Year’s Day at the resort’s Royal Deck overlooking Paradise Beach. The performance is part of the resort’s acclaimed entertainment series, Atlantis LIVE, which provides guests with an all-access pass to top musicians and artists.  Tickets start at $199 and are on sale Thursday, November 4 at www.dojacatatlantis.com or by calling 1.800.ATLANTIS. 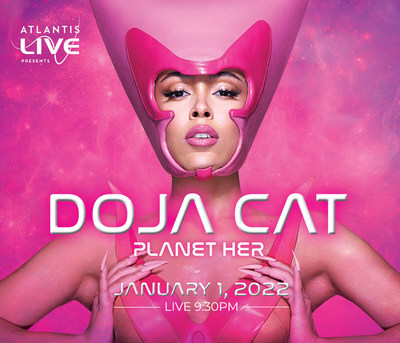 All Atlantis Clean & Safe Promise protocols will be in place to ensure the health of guests and employees.  For more information about traveling to The Bahamas, visit bahamas.com.

Tickets to the Atlantis LIVE: Doja Cat performance are available at www.dojacatatlantis.com

About Doja Cat:
3-time GRAMMY nominee Doja Cat made her first upload to Soundcloud in 2013 at just 16-years-old. Having grown up in and around the LA area, she developed a knack for music by studying piano and dance as a kid and listening to the likes of Busta Rhymes, Erykah Badu, Nicki Minaj, Drake, and more. Soon, she went from obsessing over Catwoman (the Halle Berry version) to crate digging on YouTube. The budding talent taught herself Logic and how to compose on a midi controller. Signed to Kemosabe/RCA in 2014, she released her Purrr! EP and followed that with her debut album Amala in spring 2018, but it was her August 2018 release of «Mooo!» which catapulted her into the mainstream and was met with critical acclaim.

Doja Cat released her sophomore album Hot Pink in November 2019 to mass critical acclaim, the album was a platinum success with over 14.5 billion streams worldwide. Hot Pink features «Juicy» which hit #1 at Rhythm radio, «Say So» her Grammy nominated #1 smash record and «Streets», the viral sensation that soundtracked the ‘Silhouette Challenge,’ one of the biggest TikTok trends to date.

The success of «Say So» which hit #1 on the Billboard Hot 100 and has been RIAA certified 4x platinum and streamed over 6.7 billion times catapulted Doja into global superstardom. She has taken home the Best New Artist Award at the MTV VMAs, the MTV EMAs, the AMAs (where she also won the Best Female Soul/R&B Artist Award) and the iHeart Radio Awards. She has been nominated for countless awards including 3 GRAMMY Awards, 9 MTV VMA Awards, 5 Billboard Music Awards, 4 American Music Awards, 2 BET Awards, and 2 People’s Choice Awards.

Doja’s creativity and showmanship as a performer have been praised time and time again, she has delivered unique and show stopping performances on nearly all the major Award Show stages including the GRAMMY Awards, the American Music Awards, the Billboard Awards, the iHeart Radio Awards and the MTV VMA and EMA Awards. Her last tour sold out in 10 minutes and she has played numerous festivals including Rap Caviar Live Miami, Posty Fest, Day n Vegas and Rolling Loud LA.

Doja Cat’s new album Planet Her came out in June 2021 and dominated the charts, debuting at #1 on the Billboard Top R&B Albums chart and #2 on the Billboard Top 200 and Billboard Top R&B/Hip-Hop Albums chart, marking Doja Cat’s career best and highest debut to date with 109K in total activity in the US alone. Spanning a range of genres Planet Her also generated the highest first day Spotify streams for an album by a female rapper, was the top Pop album upon release based on consumption according to MRC data, and marks both the biggest debut for female rapper and the top female R&B debut of 2021. «Kiss Me More» ft. SZA, the lead single off Planet Her is certified platinum by the RIAA and hit #1 at Top 40 and Rhythm radio with over 2.8 billion streams worldwide. Doja Cat recently became the first rapper to have 3 songs in the Top 10 at Top 40 radio

Atlantis features six distinct properties, from the iconic The Royal to The Beach and The Coral to the luxury properties, The Cove and The Reef. The resort is built around Aquaventure, an innovative, 141-acre waterscape of thrilling slides and river rides, pools, and white sand beaches. Home to the largest open-air marine habitat in the world, over 50,000 marine animals from 250 species make their home in ocean-fed environments. From unparalleled meeting and convention space to the luxury Atlantis Marina accommodating mega-yachts overlooking Marina Village, a Bahamian marketplace, the Atlantis experiences are endless. Other resort amenities include the 30,000 sq ft tranquil Mandara Spa, Atlantis Kids Adventures (AKA) for children ages 3-12, and CRUSH, a cutting-edge teen club. The award-winning 18-hole Tom Weiskopf designed golf course Ocean Club, renowned Atlantis Casino, and duty-free shopping complemented by restaurants and lounges with celebrity chef culinary masterpieces including Fish by José Andrés, Nobu, by Nobu Matsuhisa; Olives, by Todd English and Casa D’Angelo by Chef Angelo Elia.

Dolphin Cay, the resort’s 14-acre marine mammal habitat, is a state-of-the-art education center and animal-rescue rehabilitation hospital whose first residents were 17 rescue dolphins from Hurricane Katrina. Visitors to Dolphin Cay can participate in creative, non-disruptive «interactions» that build real awareness, stir emotion, and help fund the resort’s conservation efforts. Through these guest participations and those offered through Atlantis Marine Adventures, a portion of the costs of these interactions is donated to the Atlantis Blue Project Foundation (ABPF), the resort’s nonprofit, 501(c)3 organization dedicated to saving sea species and their extraordinary habitats throughout The Bahamas and surrounding Caribbean seas.