LOS ANGELES, Oct. 30, 2021 /PRNewswire/ — Legendary hip-hop icon Afroman closed out 2020 with a feature on «WHOLEthing ft. HEwas» alongside electronic music producer BLAZAR.  Since then, Afroman has signed with BLAZAR’s Cosmic Wire label, and the duo are finding the perfect combination between the present and past. Now, nearly one year later, they are back to put their studio magic on full display with the funk-driven new single «Step it UP» available via a collaboration between Cosmic Wire and AntiFragile Music (INgrooves / Universal). 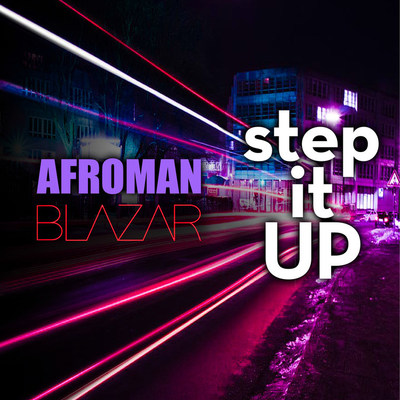 Listen to «Step It UP» now: https://ffm.to/stepitup

Wasting no time with a hard-hitting, old-school hip-hop bassline, BLAZAR’s retro synth work soon falls into place.  The opening verse by Afroman delivers the no-nonsense message: «Step up your game, drop dead weight.»  Venturing into electro pop schemes, «Step it UP» offers a fresh soundscape for Afroman to showcase his world-renowned lyricism.

«This was such a raw song from the start – Afroman and I wrote it in my studio during the lockdown,» said BLAZAR aka Jerad Finck. «He fired the lyrics off in this explosion of energy, and it was just so inspiring, so pure. It was a moment that really spoke to me in a visceral way about direction and intention.  The gatekeeper is the one in the mirror, if you want it, do better.»

Throughout 2021, Afroman was busy in and out of the studio with his «This Ain’t No Joke, This Ain’t No Gimmick, I Got to Get Paid in the Middle of a Pandemic» Tour playing to his fans across America, and recently releasing the music video for his sophomore Cosmic Wire single, «Cuz I’m High», the official remix of «Because I Got High» that brought the burgeoning rapper Kid Lennon into the limelight.

With roots as an accomplished funk bassist, guitarist, and drummer, Afroman has a truly one-of-a-kind successful rap and hip-hop career.  His sophomore release Because I Got High, went Platinum in 2001, going on to earn him a GRAMMY nomination for Best Rap Solo Performance (2002) for the album’s title track which kick started a 20-year trend of hit after hit, including «Back To School», «Crazy Rap» and «Palmdale«.  In 2020, Afroman signed to Cosmic Wire for his future releases.

Cosmic Wire CEO, Jerad Finck aka BLAZAR is an electronic music producer currently signed to AntiFragile Music (INgrooves/Universal) under the legendary Tom Sarig (Against Me!) and published by Sarig Songs (Kobalt Publishing).  As a top-tier artist, Finck earned official backing to establish his own imprint, Cosmic Wire.  The moniker BLAZAR emerged after a successful indie music career under his given name.

Since his 2020 debut BLAZAR holds producer credit on records with Afroman, Daxsen, Corey Feldman, and HEwas, while working alongside production team members of the Pixies, U2, Collective Soul, and Pink, offering exploratory synth transmissions, electro pop, retrowave, hip hop, and Daft Punk vibes that have garnered over two million streams and support from artists such as the Stafford Brothers.

Jerad has had 3 top 40 records with his last single debuting on Billboard selling 60,000 copies in its first few weeks and was the grand prize winner of the USA Songwriting Contest (previous winners include Megan Trainor and American Authors).